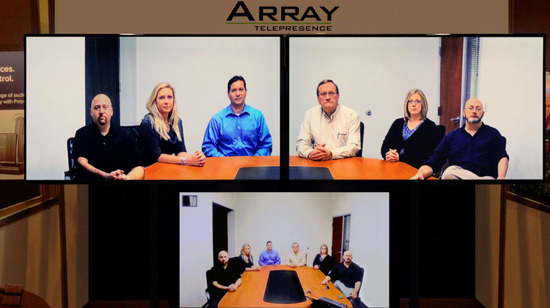 Above – Array’s Immersive Everywhere – The company showcased its ability to use its Equal-i Technology to send its proprietary dual-screen immersive telepresence scene to any videoconferencing system with two displays using the 1080p data channel to send the second/right-side screen. You can see the exact same scene below the dual screens using a legacy pan-tilt-zoom camera in the usual and customary place. To make the point Array used an older Polycom HDX codec in its exhibit without an Equal-i system to demonstrate the ability for enterprise clients to call older 2nd tier videoconferencing rooms or partners and customers with older videoconferencing systems and still be able to push out an improved dual-screen immersive experience. The company describes the importance of this capability in making its customer’s executives and subject matter experts look better when conferencing with their partners and clients while improving the quality of the visual information shared through facial expressions and body language. 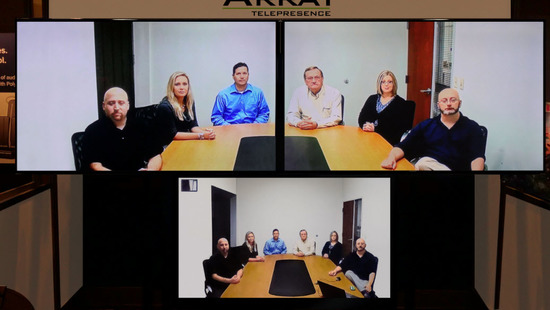 Above: Immersive PTZ – In this operating mode the company demonstrated the industry’s only solution for improving the incoming scene from a site that doesn’t have Array’s technology. The far side of the demo was using the same Pan-Tilt-Zoom camera used in the earlier comparison but Array ran the incoming image through the “receive module” of their Image Processor to show the improvement that can be expected when improving an incoming call from a system using a PTZ camera. You will notice that Immersive PTZ image isn’t as resolute as the Immersive Everywhere scene above because part of Array’s magic is the company’s revolutionary DX camera that captures almost 4K resolution giving their image processor plenty of resolution to work with for image improvement. You will also notice that the scene doesn’t have perfect vertical eye-line because the Pan-Tilt-Zoom camera is in the usual and customary place vs. concealed at perfect vertical eye-line like Array’s DX camera. In addition to improving immersion the technology lights up the 2nd video screen and centers the scene for the local participants vs. everyone having to look to the left. Array allows you to SEND the improved Immersive Everywhere scene while SIMULTANEOUSLY RECEIVING the improved Immersive PTZ scene! 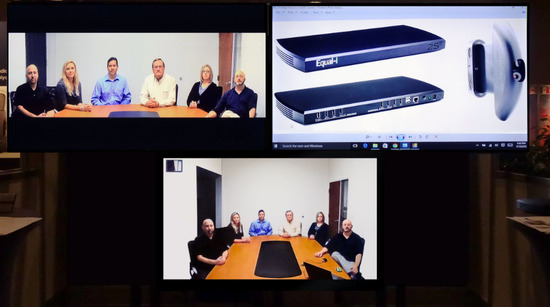 Video+Content – Common Question Array is Asked: What happens to the data if I use the 2nd screen for Immersive Telepresence? With the company’s Video+Content capability users can switch back and forth between sending dual-screen immersive telepresence and a single-screen view with data collaboration. The far-side loses lifesize immersion BUT everyone is still Equal-i-zed in size, image-improved with perfect vertical eye-line… Still waaaay better than the scene you would get from a Pan-Tilt-Zoom camera.

This is also the operating mode for improving calls that go through an MCU, Video Meeting Room, or when conferencing with desktop videoconferencing clients like FaceMe, Skype4Business, Videxio, Vidyo Desktop, and Zoom.