Editor’s Note: After publication, Cisco forwarded the following clarification regarding pricing. “CMR will be available for an add-on cost associated with an existing WebEx Meeting Center deployment of approximately $17 per user/per month (depending on user volume).” All mentions of pricing have been edited accordingly.

Cisco has a serious entry into the exploding cloud interop VC market, by enabling users to upgrade the new WebEx, into an interop cloud room in and of itself, with the CMR add-on. Let’s Do Video was invited to a special analyst briefing with Cisco Collaboration SVP Rowan Trollope to learn the details. What does this mean for Cisco, the rest of the interop cloud market, and WebEx users? Keep reading to find out, but first a little background.

The Explosion of Interop Cloud Services

The entire interop cloud industry has grown out of nothing in the last three years. Today there are easily a dozen vendors successfully selling services touting a primary benefit of expanding the reach of existing Cisco deployments. For example, Blue Jeans Network has shared with me that a significant majority of their meetings include a traditional (Cisco, Polycom, Lifesize, etc.) meeting room endpoint. While the analysts were busy arguing about who would win the hardware v software VC wars, it turns out everyone was wrong as software became an enhancement, rather than a replacement, to hardware VC. This was great for Cisco, as they found themselves touted, rather than usurped, by the wave of software VC upstarts. But whether Cisco sees the cloud interop players as friend or foe, it was only a matter of time until they decided to take a piece of the pie for themselves.

Videoconferencing adoption took an unexpected left turn a few years ago. The plan was for VC to trickle down from the $20k – $200k boardroom solutions, to more affordable $2000 systems for the everyday team meeting room. Desktop was to be addressed with a software client designed to interop with the meeting room systems. Cisco was clearly trying to lead in this direction with its new plug and play hardware, which stole the show at Enterprise Connect 2014, and the ongoing development of the Jabber client. I believe Cisco was as surprised as everyone else by how quickly the meet me interop room paradigm has become the standard model for videoconferencing, and they are no longer satisfied with leaving that growing space to the upstarts.

The writing has been on the wall ever since 2013 when a wave of startups with Tandberg DNA entered the cloud interop space, joining the earlier pioneers who created the category only a few years earlier. Meet me interop rooms are, in my opinion, the present and future of business class video meetings. The “meet me” concept works for people, it is how we have been audio conferencing for decades, so we are extremely comfortable with the “meeting in the sky” dynamic. No one wants to download specific new clients and dial direct for each video call, they want to join virtual meeting rooms using their system of choice, or via a browser based plugin. Perhaps just as importantly, no one wants keep pretending there is still a difference between webconferencing and videoconferencing, they just want to meet online. 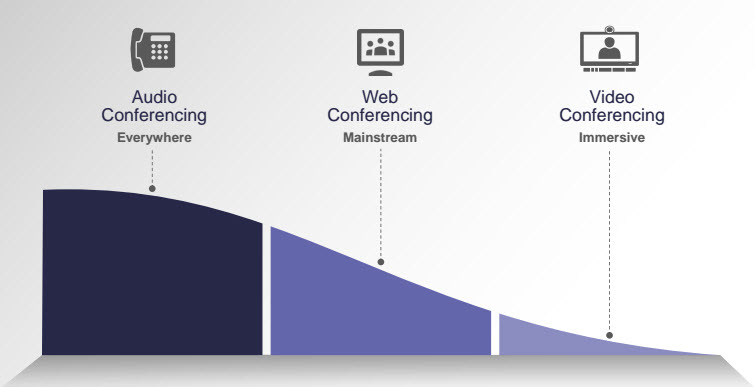 I tried to put the stake in the heart of webconferencing back then, but Cisco kept the term on life support by continuing to classify WebEx as webconferencing. If millions of people are using it, then it’s not a dead category. Well, I may not have the power to kill webconferencing, but Rowan Trollope arguably does, and he read out its eulogy during this analyst briefing. Rowan was singing my tune as he declared that people don’t want to decide if they should use audio, web, or videoconferencing solutions to meet with people, they just want to meet. We just need one type of solution, Conferencing Solutions. This is what Rowan is aiming for with the new WebEx. It is eschewing the old web/video/audio pigeon holes and simply calling itself a conferencing solution. If you want to meet with Rowan, you go to his WebEx room. Whether you decide to meet using only audio, or with traditional VC, or from your desktop, is simply a matter of preference, circumstance, and convenience; but it is your choice, and not mandated by the meeting type. 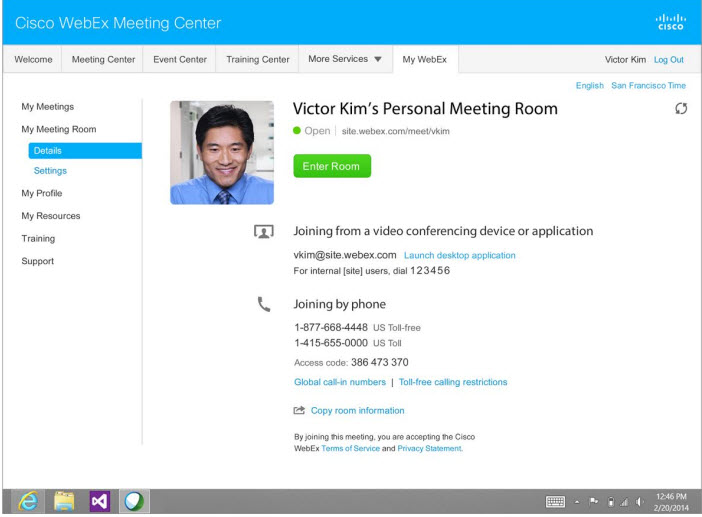 What Is the New WebEx, and What Does It Means For Cisco

The big announcement can be summed up by three major points:

The last one is particularly interesting. Cisco isn’t the first to offer personal rooms. I have my own personal, permanent rooms on at least 5 services that I am evaluating right now. It makes life so much easier because I can always join, or invite people, using the same link. I can even tell my regular guests to just go to my room on whichever service, as they have it bookmarked. Unless I have a security concern, I rarely need to create a unique meeting ID for a one time meeting. The real difference here, is that Rowan is pushing the concept beyond a regular place to meet, and into virtual version of a physical office. He said he keeps his desktop system connected to his WebEx room, so anyone can walk into his virtual room with the same human dynamic as walking into his physical office. His colleagues appear ad-hoc on his screen, just as they appear ad-hoc at his office door. He doesn’t want them to send an email asking if they can get on video, he wants them to come into his room and see if he is busy. The key here is that from Rowan’s perspective, no call is being made. There is no dialing. He just looks over and talks to whoever entered his space. From his guests’ perspective, they click a link, and open a browser window (plug in, naturally) looking into Rowan’s office.

You may say that there is nothing new there, it is just a cool way to think about using VC technology. You may also say that very few people will actually work this way. I am not sure. I could see it catching on. But either way, it is encouraging that Cisco is thinking about using conferencing technology to mimic natural interactions, rather than simply improving last year’s VC hardware.

The reality is this is a no lose situation for Cisco. They can’t mess this up. Even if they completely fail to gain traction with WebEx in the cloud interop space, they still have an entire industry devoted to adding value to Cisco hardware systems. The hardware market may be shrinking, but it is still massive, and massively profitable. A more likely scenario is that WebEx (with the ~$17 interop add-on) will be seen as a worthy competitor in the interop cloud space, and with the backing of Cisco should be able to hold a nice market share. 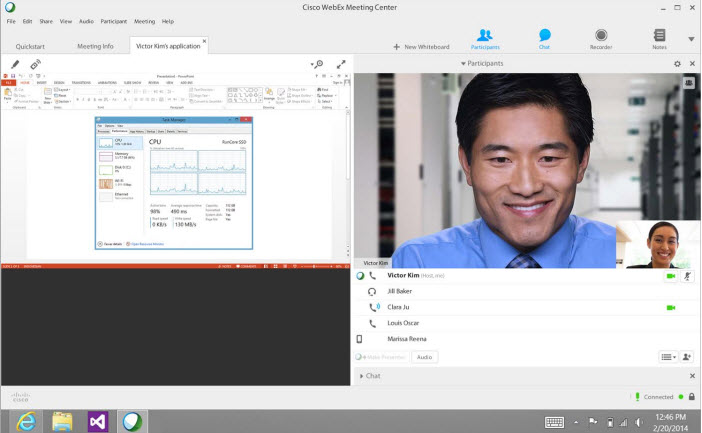 Initial Thoughts On The New WebEx

Obviously, a full review and ranking isn’t possible yet. But I have some initial thoughts. Overall, in terms of workflow and UI, it isn’t a runaway favorite, but its good. It is clean and responsive. The service itself felt more solid than previous WebEx experiences. There were 25 people on the call and no one was dropping or complaining about issues. Cisco even had someone connected, with video, on their iPhone outdoors in San Francisco and it was a real, usable connection (they were able to have a natural back and forth conversation).

The video quality is good (I am guessing the service supports up to 720p, if anyone knows, please say in the comments). In fact, Rowan used this as part of a little gag during the briefing. For the first half of the meeting he had a fake backdrop behind him, and claimed to be in an expensive Telepresence room, then he revealed that he was actually at his home office on a desktop device. A fun gimmick, the reality is any Cisco hardware device will provide a similar experience, because the limitation is whatever the cloud can support, not the devices themselves. But nitpicking aside, it did draw a room full of analysts’ attention to the video quality. If anyone saw any major issues, I am sure we will be hearing about it.

There are a few things I don’t like, but none of them are disastrous. The self image / pip management could be improved. There are still some “seams” between the old WebEx and the new interop cloud. A few UI changes could make it truly seamless. There are a few useful features that I think many users will miss (I am not afraid to click any buttons, so I find all the great tools). While it may not be perfect, it is a vast improvement from the old WebEx we love to hate, and competitive with today’s top tier solutions.

What This Means to WebEx Users

If you are already a WebEx user, for ~$17 a month you can upgrade it to a real conferencing solution with your own permanent meeting room. If you were looking at one of those new cloud interop services, Cisco is pretty much beating you over the head with this.

What This Means to Non-WebEx Users

You know how you dread being invited to WebEx meetings? You won’t dread it anymore. They fixed many of the issues users had been complaining about. And if you are looking for a cloud VC solution, you might want to add WebEx to the long list of services you are considering.

As far as the market is concerned, I think it is growing fast enough to accommodate one more player, even if that player has a pretty heavy footprint. Cisco definitely has some massive channel advantage, and should have little trouble converting their existing WebEx users to this new model. But there is still a lot of greenfield out there, and the massive SMB market is more than happy to play with the new upstarts in the field to find the service with just the right set of features for their needs. Things are bound to stay interesting in the foreseeable future.