There has been an age-old discussion when replacing handsets in telecom deployments.

Is DECT or Wi-Fi right for your environment?

We usually see benefits of both cited for different working conditions and network setups.

Upon moving to Microsoft Teams, while desk workers can remove the need for a handset completely (mobile app or softphone with headset/mic), deskless workers still have a decision to make.

Sure, they could opt to use the Teams mobile app as well. But why weren’t they using apps and softphones beforehand then?

While most users want to use their own phone for the majority of work, dropping it from a great height or having it run over by a forklift is not on anyone’s agenda.

This is the argument for a rugged device like any classic telecoms deployment. Just because we’re now using Teams as the PBX, it doesn’t mean the use case for portable devices changes.

The benefits of such devices remain:

When it comes to DECT vs Wi-Fi, arguments over the past decades have concluded that DECT is often both better quality and cheaper than extended Wi-Fi or 3G/4G/5G. For Wi-Fi phones to match or better than quality and reliability, there needs to be serious network quality powering the devices you connect on top of it.

Instead of forcing teams to adopt a mobile app, despite acknowledging they were unsuitable before, Teams implementations must consider whether DECT or Wi-Fi is the best choice once more.

Let’s take a look at the options for Microsoft Teams when it comes to portable devices.

As of August 2022, there are two vendors providing Microsoft Teams DECT equipment.

They are:
1.Spectralink
2.Poly

Spectralink was first to market with its DECT solutions for Microsoft Teams.

You can now use any of the following devices as part of your DECT solution when rolling out (or after) you’ve moved to Teams: 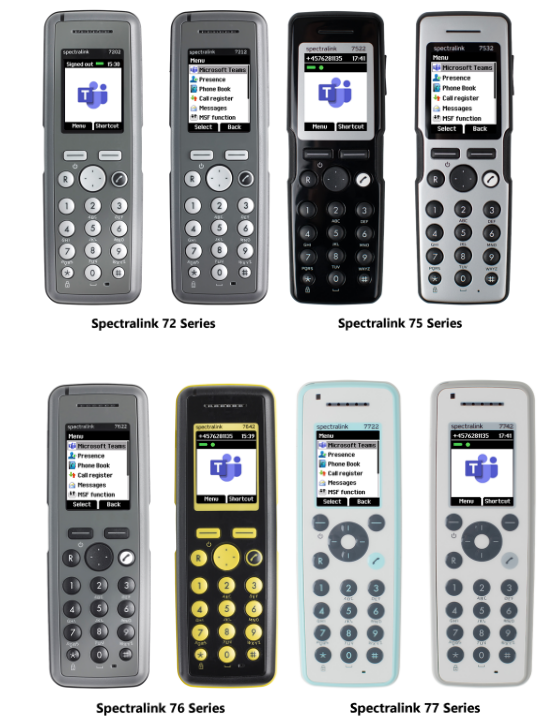 The higher the number in the Spectralink series, the more functionality you get on the handset.

The 72 series is great for a voice-centric user that doesn’t need much functionality aside from calling.
Moving up in model numbers adds headphone sockets and/or Bluetooth, advanced (e.g. receive and confirm) messaging, higher levels of robustness, and cleanability (the 77 series being the ‘healthcare’ version of the equivalent 76 series, for example).

They also include hardware like ripcords (e.g. full emergency a patient has escaped the psychiatric ward). This functionality is legally required in some countries for ‘Lone Worker protection’.

Like any DECT deployment, you’ll need a base station to charge the handsets and a server to operate and maintain the connection between Teams Phone SIP and your handsets.

Supported servers (which can be physical or virtual) include: 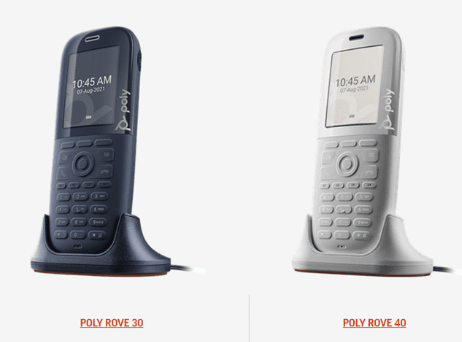 The main differences between the Rove 30 and Rove 40 are that the 40 includes a dedicated emergency button, vibration mode, and the ability to connect a Bluetooth headset.

Both are drop tested to 2 meters and have 18-hours talk time and 300-hours standby time.

Supported base stations include:

As of August 2022, there aren’t any certified Wi-Fi phones for Microsoft Teams.

Microsoft is yet to introduce a certification program for Wi-Fi-enabled phones but it must be on the radar in the not-so-distant future.

And, as Dom Black, Research Director at Cavell Group, points out, cloud communications (UCaaS) penetration sits at just over 18%, indicating that there is still a huge global market left to migrate to the cloud.

Wi-Fi devices are crucial to those environments where DECT is not accessible or possible due to network environments.

When it comes to choosing between DECT and Wi-Fi for Microsoft Teams, the two major elements to consider are:

Whatever you decide, make sure you choose the option best for your business.