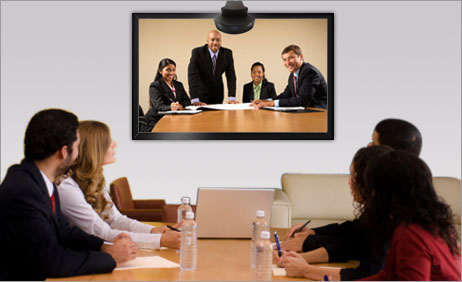 * Polycom and Redshift Research survey of 1 205 business decision-makers in 12 countries shows video conferencing becoming a business communication standard, with 76% of respondents saying they use video solutions at work today, and 56% of video conferencing users participating in at least one video call a week.

The survey found that video is becoming more pervasive in businesses across the globe. When asked to choose their preferred methods of communications today, respondents ranked video conferencing third (47%) after e-mail (89%) and voice/conference calls (64%), and those same business leaders and managers expect video to be their most preferred collaboration tool in three years (52%), followed by e-mail (51%) and voice/conference calls (37%).

The survey provided sharp insights from video conferencing users into which behaviours constitute an ideal video meeting, and which are distracting for business decision-makers.

The survey found the top three most important criteria for an ideal video meeting are:

* The ability to hear everyone clearly (69%).
* Technology that is straightforward and easy to use (60%).
* Good eye contact with colleagues/everyone is clearly visible (58%).
Respondents who use video conferencing said the most distracting things, which should be avoided during video meetings, are:
* Mobile phone going off during a meeting (58%).
* People attending from inappropriate places, eg, public transit, in stores (52%).
* People who are multitasking or look distracted, eg, tapping on keyboard (51%).
* Inappropriate background distractions such as colleagues, music, noise (50%).

What one country finds distracting, another doesn’t mind

The Polycom survey shed light on different opinions between users of video collaboration in various countries, where one activity may be distracting in one country but accepted in another.

* Appearance matters (sort of). When asked if people not wearing business attire was a distraction, respondents from India, Singapore and Poland topped the list (30%, 26% and 21% respectively), and on the other end of the spectrum, 13% or fewer of respondents in the UK, France, Russia and The Netherlands find attire to be a distraction.

* APAC sees video as critical tool for global business. In the Asia-Pacific (APAC) region, international communications (between colleagues in different countries) ranked as the most important use of video conferencing (65%), versus 57% for inter-country communications.

* See me, hire me. The US leads the way in leveraging video conferencing for recruitment and hiring, as 32% of video respondents said they use or would use video for this purpose, followed by APAC at 28%.

* Flexible working. In the Europe, Middle East and Africa (EMEA) region, respondents were mostly using video conferencing to empower flexible working environments, which was cited as the second highest reason for using the technology, after “connecting with colleagues across the country”.

As access to video conferencing increases to virtually all employees with a mobile device or laptop, the survey found that video users in various business functions within organisations use video to defy distance in slightly differing ways:

* CEOs and founders rated flexible working and inter-office/local meetings (50% each) as their top reasons they use or would use video conferencing, followed by international meetings (46%), new business/sales and company/department meetings (39% each).

* During an average week, the marketing function uses video collaboration the most frequently (64% use video at least weekly) in an organisation, followed by IT/engineering and facilities (62% use video at least weekly). However, when it comes to daily usage of video at work, the HR function is the power user (32% indicate they use video conferencing daily), followed by sales executives (28% indicate they use video conferencing daily).

Note to editors:
The survey, “Global View: Business Video Conferencing Usage and Trends,” was conducted by Redshift Research on behalf of Polycom.