For this review, let’s get right to the heart of the matter and address the audio quality head on. I gave the Spider Conference Phone  (from Phoenix Audio Technologies) what I consider to be the harshest test of all. Blind comparisons with multiple listeners.

I have a number of headsets and audio peripherals at my disposal, and during the last few weeks I would switch between them during video calls, asking my guest which sounds better (the old “this one? or this one?” test). Without exception, my friends and colleagues rated the Spider alongside the high quality headsets and vastly preferred it to some open mic solutions.

When I would switch between the Spider and headset mics they consistently had no preference. However, when switching between the Spider and, for example, a webcam mic they noted a drastic difference and indicated that the meeting experience was significantly improved by using the Spider. Keep in mind, this was a blind test, they had no idea what peripheral I was using at any given moment, they just knew what sounded good to them.

The Phoenix Spider provided headset quality audio, without having to wear a headset!

For me, this is the best of all worlds. I don’t have to wear a headset, and I don’t have to give up sound quality. Considering how often I am in video meetings, this is a big win/win for me (the most comfortable headset, is no headset at all).

For the primary intended use of the Spider (meeting room conferencing), it means that every person in the room can potentially sound as good as if he/she was wearing an individual headset. Remote participants will be able to join in the conversation without the suffering the strain of mentally processing low quality audio. In other words, rather than spending their brainpower deciphering what is being said in the meeting room, they can focus on the actual content of the meeting, and participate much more effectively. 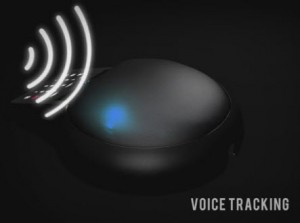 When I first saw the voice tracking blue indicator lights, I thought it was a nice aesthetic touch. It looks cool and will impress guests in your meeting rooms. But after using it, I realized its function is far more valuable than its form. It is hard to explain without experiencing yourself, but it is reassuring to know that the Spider is picking up your voice, and specifically your voice. The fact that the light follows you around the room, or switches between active speakers, somehow is far more helpful than a static light would be. Other lights and UI elements were equally well thought out and implemented. 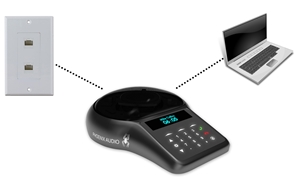 Please see the video above for the full feature list, but I should mention that the Spider can act as both a standard IP speakerphone (PTSN option available), and USB peripheral (which is how I used and tested it). The USB functionality allows for easy integration with a number of VC options. Using the Spider for your typical phone calls, as well as for your video calls, can save the money typically wasted by having redundant, single purpose, audio systems in your meeting rooms. An even more impressive power feature is the ability to bridge your phone and video calls, bringing both remote video and remote audio participants into the same meeting.

This may seem like a short review, but the Spider was intentionally designed to be simple, so there isn’t a lot to explain. It was plug and play and sounded great, end of story. Incoming audio was clear and intelligible through the Spider’s speakers over weeks of meetings, using countless videoconferencing solutions and demos. I even used it to record a recent Podcast, which isn’t even really within its intended primary use case.

Audio is key as we continue to turn up our meeting rooms by enabling remote attendees to truly participate and contribute to the work at hand. Skype over laptop audio doesn’t cut it, but you don’t have to spend thousands of dollars for studio audio either. A solution like the Spider could provide the right mix of quality, affordability, and flexibility for your environment.