Lifesize has undergone a dramatic transformation in the last few quarters. But in a way, they are really just going back to their roots. Lifesize started a decade ago as a scrappy fighter, moving quickly to outpace the old guard. They made high definition videoconferencing a reality and thrived on innovation and change. Time passed and they became part of the hardware VC establishment and one of the “big three” in room systems. But due to the revolution of cloud interop video, over the last few years the game has changed. While the meeting room system is still, in many ways, central to the business VC experience, the new hotness is cloud interop rooms.

By “hotness” I am not just talking about the fact that industry analysts approve of the model, or that, on paper, they solve a lot of the historic VC problems with B2B and ease of use. I am talking about the fact that we are seeing massive growth in VC use and users, almost all fueled by the introduction of these services. With a young, but established, market of VC interop services, Lifesize is once again the scrappy fighter with its new Lifesize Cloud service. However, this time they are backed by a decade of video (and video market) expertise which may serve to give them a leg up on the crowded field of software based upstarts.

The shift from hardware development to software development is not trivial. Back when I used to test Lifesize endpoints (several years ago) at the Wainhouse test lab, new products would come out on a yearly (or longer) cycle. Software (or firmware) updates were somewhat more frequent, but nothing like the development cycle expected of a pure software based firm. I’ve been logging into the Lifesize Cloud regularly since its pre-InfoComm launch and I can say definitively that they are acting like a true software company with updates that appear to be on a 6 week cycle. In fact, when I chatted with Lifesize CEO Craig Malloy at the InfoComm Show, I learned that my initial concerns (a few workflow quirks) had already been addressed through updates. Pretty cool considering that the product had only been released a month (or so) prior! 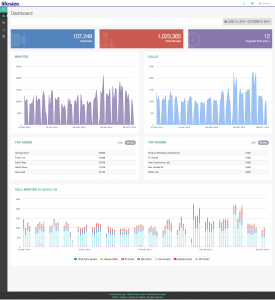 New Dashboard Monitoring System
I apologize to my readers for burying the lead here. This article was supposed to be about the Lifesize Cloud’s new portal features, but after briefing with Rafi Anuar (Lifesize’s Director of Product Management), I realized it was part of bigger story. Lifesize Cloud may have had some catching up to do upon initial release, but now they are jumping on the newest cloud VC trends early. I very recently wrote about analytics for VC cloud services and predicted that the industry would quickly make this a trend. Less than a month later, Lifesize is in the game.

Please read my previous article for my full thoughts on this trend and why it is so important, but to briefly summarize, it shows how…

The new Lifesize Cloud ROI tools are just part of an entire new web console for customer admins, with a new layout/skin designed to give a higher level of clarity and control. In addition to the top level data (total calls, total minutes, top users, top room systems, etc), it also allows the admin to dig down and manage every video system in the company. It works with any system, but has extra functionality with Lifesize room systems.

To be clear, this new tool doesn’t provide the type of deep diagnostics that IT admins can use to manage individual calls in real time. This is primarily an ROI tool designed to let their customers know that they are getting their money’s worth, and identify general adoption trends and issues among their user base. In fact, it is specifically designed to create charts and graphs that look great in PowerPoint presentations. Now your IT director can easily show the higher ups exact usage, growth, and ROI, in a clean professional slide deck without needing to import data into Excel for chart creation (always a headache). While the data is currently “top level,” Rafi did indicate that this is just the beginning for this tool, stating that they have “a lot more planned” and that Lifesize is actively working to expand it based on continuing dialog with their customers regarding their reporting wants and needs.

While the ROI tools themselves are cool, I am even more impressed by Lifesize’s strategy, direction, and their ability to really function as a software company, despite their hardware background. I am also pleased that they are recognizing the importance of cloud video. Some hardware firms may be tempted to treat the Cloud as a mere value add for their existing hardware business, but Lifesize is really focusing its energy on its cloud solution, despite the fact that they continue to develop (and enjoy serious revenue from) their popular hardware room systems.

The tight integration with their room systems is a major strength and differentiator of the Lifesize Cloud (the only cloud service with a native room system which results in an “Apple TV” like setup out of the box), and the fact that Lifesize isn’t putting its Cloud in the backseat to its room systems really shows that they get it. For the record, another major differentiator is their call flow, which supports both scheduled and ad-hoc calling, and also allows for direct, directory based, person to person calls, which can then be escalated to group calls without having to create a new meeting.

Things are moving fast in the VC industry, and it is pretty rough seas for any vendors that aren’t pushing forward quickly to stay ahead of the game. Under the leadership of returned founder Craig Malloy, Lifesize appears to be moving full steam ahead in the right direction.