It’s amazing how quickly things change in our industry. Just a few short years ago Logitech wasn’t considered a serious player for enterprise meeting room video. Of course, they have long owned the webcam/desktop space, but when it came to room systems the “right” way to do things was to buy a pricey camera and codec from the old guard of videoconferencing. While some business looked to cut costs with a DIY setup using Logitech gear with a cloud VC service, analysts frowned upon the setup. Watch the video above to see our concerns about laptop/webcam video in a meeting room space. Bottom line, we saw Logitech as a consumer/desktop company, not a business meeting room video company. With the massive success of their group collaboration line of products all of that changed. 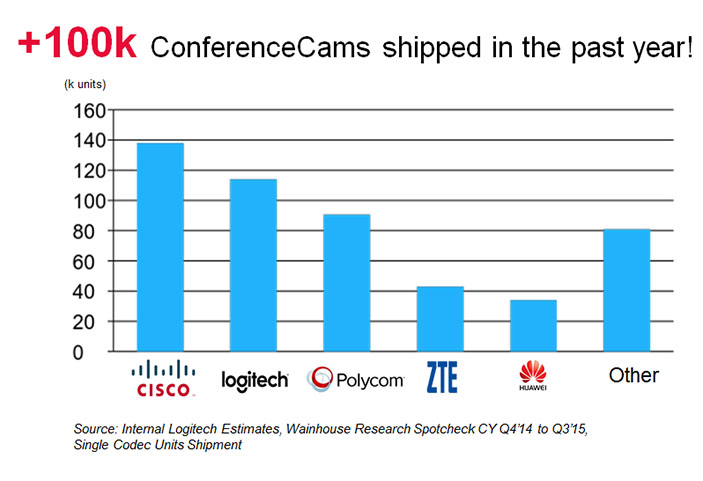 Last week, I briefed with Scott Wharton, Logitech’s VP & GM for Video Collaboration, to learn about their new Logitech GROUP solution. Please check out the press release for full details on the Logitech GROUP, and please see LDV Podcast #16 for my extended video interview with Scott Wharton when he first joined Logitech a few months back. As you can see from the slide above, I learned there is a lot more to the Logitech collaboration story than a new product announcement. Logitech is already #2 for conference room video sales, and Scott is confident that they will pass Cisco for the #1 spot in 2016.

This sudden success in the space was due to a fortunate convergence of several factors. Technology reached the point where Logitech could produce a product with the right feature set and price point, just as cloud video services became reliable, affordable and ready for mass consumption themselves. Logitech has no interest is creating or providing a video cloud service, and no matter how good their cameras are they can’t provide a good meeting without a good video service to host the call. With their new cloud partners, and today’s business community hungering for more video collaboration, the time was right for Logitech to share their vision for the modern room system.

While their ConferenceCam CC3000e was a huge success, there was room for improvement. That improvement can be found in the successor to the CC3000e, the new Logitech GROUP (shown above). To be clear, this is not just an addition to the line, but a complete replacement for the CC3000e. While the entire system has been updated, my understanding is the biggest improvements are to be found in the speakerphone portion. The speakerphone unit has undergone a significant redesign, even the control panel has evolved. But Scott assures me the cosmetics are minor compared to the internal changes. The only real negative feedback from the CC3000e was that the audio quality was adequate, but not impressive. Logitech’s sound engineers were tasked with turning this weakness into a strength and as a result the GROUP boasts greatly improved incoming and outgoing sound capabilities. For example, the GROUP has four internal beamforming omni-directional mics (compared to two on the CC3000e), and the ability to attach two external mic pods to further extend its range.

Although it is a comparatively minor point, can we talk for just a second about the name? Clearly the ConferenceCam CC3000e was not named with marketing as a high priority. It doesn’t exactly roll off the tongue. Perhaps 3000e means something to Logitech engineers but it is completely meaningless and forgettable to customers. I have to keep checking to make sure I get it right as I write this article! This isn’t an IT tool to be stuck in a server rack, it is a user facing product. If you take the time to make a user friendly product, why not give it a user friendly name? I must admit that at first I cringed at the ALL CAPS, as it is generally a pet peeve of mine, but I can make an exception in this case as it actually serves a purpose. By using all caps, writers like myself can cover the GROUP without having to write “The Logitech GROUP” over and over. The are also staking a claim to the word “group” which is the generally accepted term in our industry for meeting room video systems.

Again, the nomenclature is a minor issue. Logitech could have called this new product just about anything and it would fly off the shelves. It represents a significant improvement to one of the hottest selling products in our industry at the same price point (MSRP $999.99 for the GROUP alone, and $1,249.99 with the two expansion mic pods). With the market for these kinds of solutions being anything but saturated (in fact it is arguably barely tapped), it is a safe bet that the GROUP will easily exceed the CC3000e’s success. It also doesn’t hurt to have several successful and growing cloud video companies acting as indirect salespeople for the GROUP as it makes a great tool to demo their cloud capabilities. Between the GROUP, and the portable ConferenceCam Connect for smaller spaces, Logitech is clearly in a good position to extend their desktop dominance to the meeting room. If Scott has his way, Cisco better get used to the idea of being number #2 in the space.