Nobody Asked Me, But…

It was the famous journalist Jimmy Cannon who when faced with nothing particular to write about would fill his columns with a random series of opinions on anything he felt like saying. He’d begin every topic with “Nobody asked me, but…” and then go on to observe the world as he saw it. While I am privileged to post blogs about collaboration for The IMCCA, Cisco, InfoComm, LinkedIn and my own site, and to submit the occasional (award winning) travel blog to JoeSentMe, I haven’t had had a place to air my rambling opinions that are too big for Twitter and too brief for a blog. With that in mind I am honored to support my friend David Maldow and his new Let’s Do Video site with a recurring (when I feel like it) column of ramblings, rants, snark and musings about the things I know best – technology, AV, collaboration and multimedia (with what I’m sure will be a smattering of opinions on science fiction, travel and popular culture.) I’ll apologize now – just this one time – to anyone who may be offended by any of my comments and opinions. However, in most cases, the worst I’ll be doing is just putting in writing what industry insiders are saying anyway. If it’s not what you wanted to hear, well as I said, nobody asked me…

Nobody asked me, but the entire recent celebrity iCloud hacking episode is just ridiculous. Who in their right mind would even buy a camera if it instantly uploaded every picture taken to a public cloud before it was reviewed – but, put the camera in an iPhone and people just agree to send everything out onto the internet like mindless lemmings. iCloud is one of those Apple features that I’ve kept turned off ever since it was available – with no regrets at all. And while I’m on the subject of iPhones, who still thinks it’s a good idea to trust your money and payments to a system that can’t even keep personal pictures private – regardless of who’s “fault” it is. I for one am still wearing my “bring back iOS6 cause it doesn’t look like a four year old’s crayon drawing” tee-shirt.

Nobody asked me, but Polycom would get an awful lot of almost free press and good will from customers if it just trashed the new “three coffee stains” logo and went back to the triangles. The nostalgia would be a more powerful motivator than anything else they have going on today. To make the move more palatable and typical for their current leadership they could always say the new logo was too great a burden on the bottom line so they let it go. 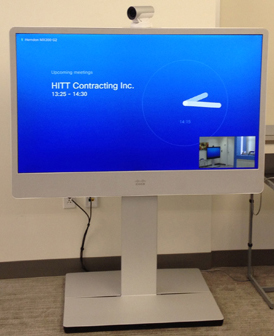 Nobody asked me, but with all the absolutely incredible and fantastic new video endpoints that Cisco has come out with recently, how is it the best they can do on infrastructure is yet another re-launch of WebEx with different new features? I mean I assume they are aware that at some point the wolf actually eats the boy because no one comes running anymore. They do tell that story in San Jose and Oslo, don’t they?

Nobody asked me, but when I think of how Microsoft has treated desktop PC users during the whole Windows 8 fiasco, the line said by the late Howard DaSilva as Ben Franklin in the movie 1776 comes to mind, “Never was such a valuable possession so stupidly and recklessly managed…” How could anyone there ever have thought it was a good idea to embrace tablet users in the hopes of gaining a few – but do so at the cost of abandoning their core desktop supporters? How freaking hard would it have been to put the simple start button back and allow desktop users to avoid the Metro live tile interface altogether?

Nobody asked me, but have you noticed that every time LinkedIn makes a change it gets worse? Take adding the insane and meaningless “endorsement” popularity contest as an example. I still get endorsements from people I don’t know for skills I just don’t have. But then, a few months ago, LinkedIn opened-up their “posts” feature for anyone to use. It was absolutely terrific – so we all knew it wouldn’t be long before they did something to mess it up – and they did. In order to read someone’s post now it automatically gets framed by all their “pulse” stories that no one wants to read. That’s just what I wanted my posted blogs to be – a pull-in for other authors that distract from my points and my brand.

….. and finally, as long as I’m on the topic of social media…

Nobody asked me, but what is it with Facebook that they can’t deliver content in a simple, straightforward manner? All ANYONE wants to see is the activity from the people and firms they chose to follow in the order of posting. Stunningly, that simple, chronological arrangement is impossible. You are allowed to pick from “most recent” which forces a two year old post to the top if anyone commented on it , or “top stories” which is chosen by some mystical algorithm that is guaranteed to leave out exactly what you want to see. Oh, and for the businesses you want to follow you may or may not have to check the “pages feed” because they might be there – or not – there’s really no way to tell. I occasionally look at Facebook on my smartphone, tablet and PC and the feeds NEVER match from system to system. I always picture the room of wannabe coders from The Social Network when I try to imagine how messed up they’ve made what should be a simple chronological order.

David Danto has over three decades of experience providing problem solving leadership and innovation in media and UC technologies for various firms including AT&T, Bloomberg LP, and Morgan Stanley. He is currently the Principal Consultant for collaboration, video, and AV disciplines at Dimension Data, as well as IMCCA’s Director of Emerging Technology. Email David at David.Danto@Dimensiondata.com to learn how he can help your organization solve problems, develop a future-proof collaboration strategy for internal use, or develop user-focused go-to-market strategies for your collaboration product or service. The opinions expressed in David’s commentary are his own, and are not representative of Let’s Do Video.