Yes, this is another article about a videoconferencing vendor with Lync integration. But I promise this one will stand out in your mind for offering something completely different and extremely cool.

We often talk about immersive experiences in video. It is a very simple concept. There are inherent compromises in meeting over video, as opposed to meeting in person. Some compromises may never be resolved. It will always be a challenge to shake hands, or share a lunch, over video. Other compromises however, can be eliminated or minimized. For example, expensive telepresence solutions attack compromises by offering full sized, high definition images, and implementing room designs that create the illusion of an in person meeting. The result is that your meeting participants are less distracted by the meeting technology, and more “immersed” in the actual meeting experience.

There is one particular limitation of meeting over video that PanaCast (shown in the video above) addresses without compromise in a unique way. When you are physically present in a meeting room (and when using PanaCast), you can look where ever you want, and focus on whatever is interesting to you, without disturbing other meeting participants. With other VC solutions you generally have a choice of two compromises.

Compromise 1 – Fixed Cameras: With fixed cameras, remote participants are stuck with the default view of the room. I’ve participated in many VC meetings where people on the far end were off-camera; or the camera was displaying a wide of a view of a big room, making it difficult to pay attention to the person speaking.

Compromise 2 – Moving Cameras: FECC (Far End Camera Control) allows remote users to take control of the camera to pan and zoom. In other words, this is a way of allowing you to look around the room. Unfortunately, it’s not ideal to have cameras moving in a room during a meeting. It’s slightly distracting at best. It also reminds the local participants of the technology, and good meeting technology should be invisible. Also, the controls for the remote participant (DTMF, etc.) can be difficult, or at least intimidating, for the casual video caller.

PanaCast allows remote participants to look around the entire room, and zoom in to any location, without any moving, or noisy, parts. How does it do this? It stitches together the images from six cameras, which capture a 200 degree panoramic view of the room. Remote viewers then digitally zoom and pan, using intuitive touchscreen controls, to “look” at anything in the room. The key is, the physical camera itself does not move or make any noise, as all of the “looking around” is done digitally. 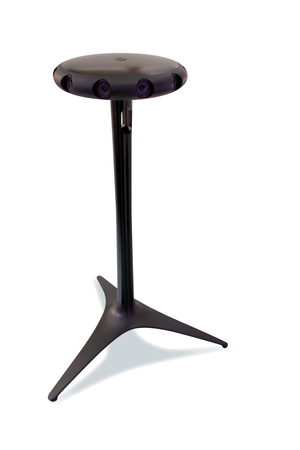 The concept of using digital pan/zoom to replace analog pan/zoom makes a lot of sense, and in the short time since I first covered PanaCast, I have seen a few other implementations of this concept. For example, the new Cisco IX5000 has two interesting new features leveraging digital image manipulation.

Note: While the screenshot above shows the full Panacast capture, the real power is the ability to zoom and pan to any part of the image in real time.

While others may be using some forms of digital manipulation, the PanaCast implementation, giving each and every far end user complete control over his or her individual view, appears to be unique to PanaCast. This makes them uniquely suited to address the growing “huddle room” market. Teams are making use of small, common spaces, to get real work done. These rooms are not “one size fits all” like the typical large rectangular board room. The PanaCast can cover any reasonably sized meeting space, regardless of shape, and up to 50 remote meeting participants will be able to focus on what they individually think is important.

Some may say this level of individual control is not necessary and simply using audio triangulation and software to always focus on the active speaker would be sufficient. However, it is very easy to think of instances where this is not true. Imagine you are an attorney attending a deposition by video. You may want to focus on the deponent as she testifies, but if the defendant is in the room, his reactions to the testimony may be far more interesting. That is just one obvious example, but the fact is, in countless meeting scenarios a remote participant will want to look around the room, just as one would do if attending in person.

PanaCast’s Lync (Skype4B) Integration
I apologize for burying the lead, but without an understanding of the PanaCast solution, their Lync integration would make no sense. I recently briefed with PanaCast CEO Aurangzeb Khan, connecting with a Lync account to a PanaCast camera in his meeting room. Honestly, I was expecting a lot of limitations and was very pleased to see that the PanaCast experience was completely maintained in the Lync/desktop environment. PanaCast is ideal for mobile devices, with intuitive pinch/swipe controls eliminating any sort of learning curve, so I was very interested to see how this would translate to a desktop experience. 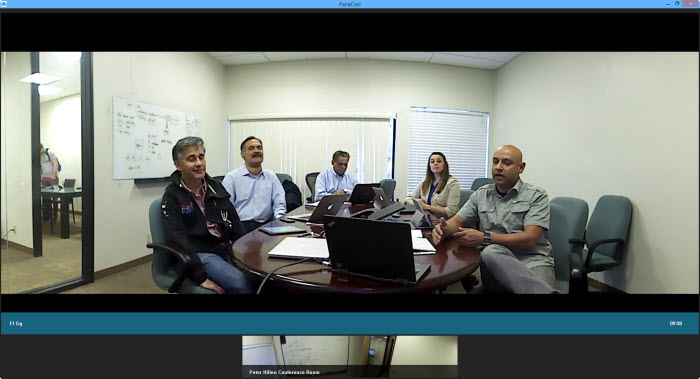 I downloaded the PanaCast desktop app and simply left it sitting in my system tray. I never had to open it or log in or anything of that nature. When I connected to the call on Lync (just as I would connect to any Lync meeting), the app automatically opened up the PanaCast view in its own window. I instinctively tried to use my mousewheel to zoom in and out, and was very pleased to see my intuition matched PanaCast’s design. I then used my left mouse button to grab and drag the image around, and again it worked exactly as I expected. That was the full extent of the learning curve. Before we even had a chance to say hello, I was an expert. After we made our introductions, Mr. Khan offered to teach me how to pan and zoom, and we had a little laugh when I said “Unless there is more to it than the mousewheel and left-click dragging, I think I am all set.”

We then added another PanaCast room to the meeting (each meeting can support up to 5 PanaCast views, and up to 50 remote participants) and I was easily able to switch from one to another. For the first few minutes of the briefing, I have to admit I was playing around a bit with the UI, testing the extent of the zoom, and panning around to all corners of the room. But as we got into the discussion, and I became more and more focused on the conversation itself, I found myself naturally panning over to the active speaker, just as I would naturally look over to whoever is talking if I was there in person. It truly made me feel like I was a more active participant in the meeting, and less like a remote, guest, viewer.

The really exciting part of this briefing was the fact that I connected to this uniquely immersive experience with Lync, just as easily as I would connect to any Lync meeting. With Lync included in Office 365, many workers are finding themselves to be Lync users by default. Unlike some Microsoft products which have been imposed on the workforce, users are reporting that they actually like many aspects of Lync (other than its relatively weak video support). This makes the PanaCast / Lync integration a win/win as it replaces one of the weakest aspects of Lync (its video) with a far superior altnernative, and allows PanaCast users to connect using their every day UC meeting client.

I understand that the PanaCast team has some exciting updates planned for Q1 2015, and I look forward to checking back in with the team to share them with you.