Yesterday, John Chambers (CEO and Chairman) and Rowan Trollope (SVP / GM Collaboration Tech Group) from Cisco were joined by Aaron Levie, the Cofounder and CEO of Box, to delivery the keynote speech at the Cisco Collaboration Summit in Los Angeles. I spoke privately with Cisco’s Ross Daniels to get some additional context and info for this article. 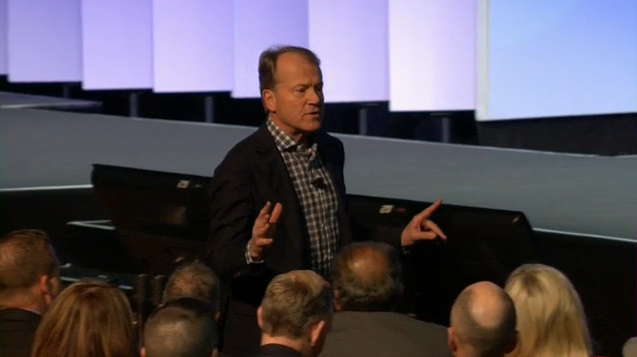 Click here to see the recorded Keynote on video

While the Keynote highlighted the expected product upgrades, it did have its share of surprises and interesting moments. John Chambers started off by explaining that when Cisco turns its attention to a technology, their goal is to dominate with at least a 40% market share. In his typical fashion, he talks global domination with an almost casual, matter of fact, “its just what we do” demeanor. In this case, they are turning their attention to cloud video communications and clearly shooting for that 40%+ market share again. In particular, Cisco’s goal is to take the benefits that their telepresence products have brought to the C-level execs of the world and bring it down to the regular worker. Mr. Chambers believes these announcements represent the biggest game changer for Cisco since they went big on Telepresence in 2006.

John quickly turned it over to Rowan, who started by noting some recent Cisco success in the collaboration space. Despite the “Hardware is Dead” mantra, he reported 33% growth in hardware demand. He was particularly proud of the hardware success, which he attributes to a strategy which effectively tripled the R&D budget for each product, without spending more money. One of the first things he did at Cisco was to reduce the product line from 65 endpoints to 17. Similar to Steve Job’s strategy when he returned to Apple, which he took a great deal of heat for at the time, but turned out to be the right decision. The trick here is, if you maintain your R&D budget, but reduce your product line by over 70%, the remaining products can potentially leap forward in design and function.

In terms of design, the new line of products is receiving much analyst love, and even a wave of “Red Dot” design awards. Not the type of recognition the old boxy Cisco products often received. The new Flagship of their communications product fleet, the IX5000 (described in depth, below), does a great job of displaying the teams current design priorities and sensibilities.

Rowan also reported a 30% increase in billable WebEx usage. This is primarily due to the recent (and long awaited), revamp of its UI and functionality, which I covered in depth in this recent article about the new WebEx. But one of the big surprises was the fact that WebEx is not the extent of Cisco’s software strategy. In fact, the biggest potential impact to the industry may come from a brand new service, first announced yesterday, called Project Squared. 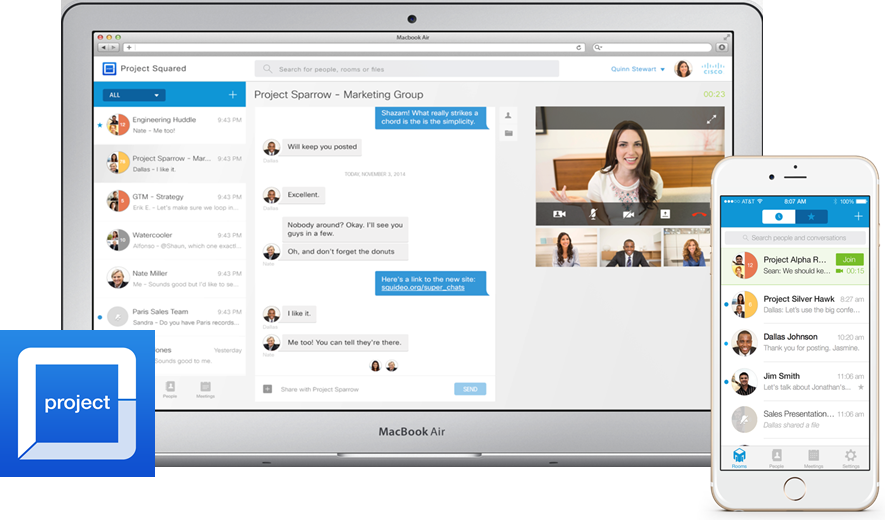 Telepresence is all about wrapping video into an experience. Project Squared wraps video into a workflow. I’ve spoken before about the value of persistent chat channels tied to virtual meeting spaces. Services like Hipchat and Slack are hot right now, and for good reason. Asynchronous, project based, chat is a convenient, efficient, and low stress way to share information with a team. Solutions, like Acano, Project Squared, and others, that tie this dynamic to video are very interesting to me.

With persistent chat, the room is not only an active workspace, but a history of the project. If someone misses a discussion, they can scroll back in the chat to see what they missed. Project Squared starts with this workspace based dynamic, and builds on it with document sharing, Box integration, and video chat. In the Keynote, Rowan explained that his computer has digitized versions of all his old worktools (phone, calculator, calendar, organizer, typewritter, etc.), but the one part of his meeting room that wasn’t in the cloud, was the room itself. A room has walls where you can hang up images and shelves where you can put files. A room has permanence. 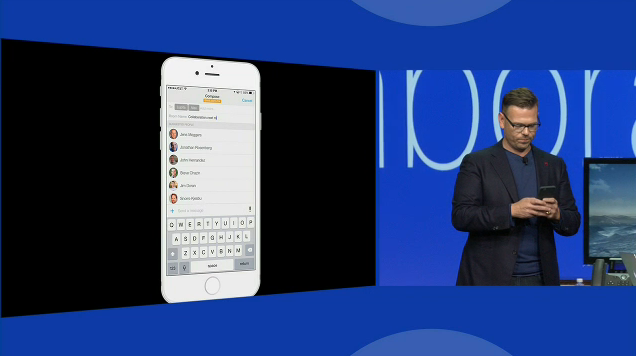 Project Squared isn’t the only collaboration tool centered around the concept of the project based workspace, but there are some notable things about this service. Cisco is better at design now. The updates to WebEx were better than expected, and this looks clean as well. It looks like software created by a small startup, with a goal of keeping things simple, as opposed to the bloated corporate-ware we are may have expected. That is of course, if that small startup got Cisco money to clean up the rough edges, add video, support it with a new software Cisco infrastructure. Rowan went through the usual encryption and enterprise security reassurances, but I was more interested in the attention to workflow and usage. 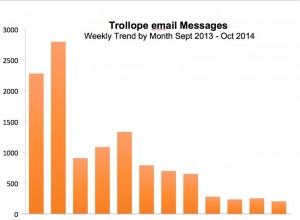 During the course of the presentation, he created a room, invited the right team members, spoke with them on video, and asked them to redo the last slide in his presentation deck. Later on, he went back into that workspace, reviewed the attached files, talked with the team, and added the new slide to his deck. The demo wasn’t about the technology, it was about a new way of working. A slide redo would normally require at least a half dozen emails back and forth. Workspace text chat is so much more immediate and easier to reference in the future. Rowan shared his actual email usage (above), since his team started using Project Squared internally. As someone who struggles with inbox-zero when things get busy, I appreciate the desire to replace emails with more effective communications.

Check out the video at the top for a more thorough description of all the features. I expect I will have more to say after testing it, but at first glance it does some things well. There are no room numbers or room specific URLs. If you are invited into a room, it appears in your room list, and you can join it at any time. 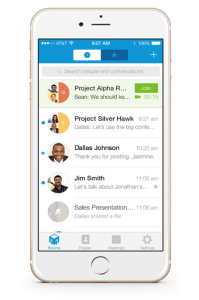 The room list view itself is interesting, as you can see the last comment, and current occupants, of all rooms without entering them. Someone involved with a number of projects and a number of teams, can get a sense of their overall world by scanning the room list, and jump into any project that needs help at any given moment.

There were a few remaining questions. What is the business model (currently it is a free download)? Why the delayed support for video in Chrome? Why does Jabber still need to exist? For that matter, why should WebEx be a separate product from Project Squared. The demo was sure to note that Project Squared calls can be easily transferred to WebEx, the products work together well. This is nice reassurance for those invested in WebEx, but why remain invested in WebEx? For now WebEx supports larger meeting rooms, and has other benefits, but they could/should be incorporated into Project Squared, or perhaps a Project Squared Business Class? If we are thinning out product lines, we have to take a hard look at Cisco having three software video solutions.

I spend so much time talking about software video, do I really think Cisco should be making a new three screen telepresence solution? While I believe Rowan’s explanation about the market demand and profitability, I think perhaps this is just as valuable to Cisco as a flagship product to highlight their new design chops. This is about redefining Cisco as a green, efficient, agile company. It is all about recyclable materials, low weight, low power requirements, and simplicity. For example, in the picture below, Rowan compares the camera unit from the new and the old versions of their telepresence system. 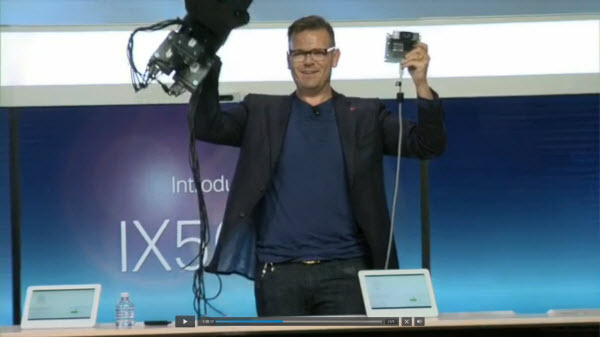 There is a lot to like about the new design. It doesn’t require a custom room with custom power, it has a much easier set up, etc. Of course the video and audio have impressive specs. See the video above for the full feature list, but I particularly liked the microphone management, and the cool trick they do (using software “dewarping” of the image) to make a whiteboard on a side wall appear to be flat, and more readable.

It will be hard to shake the perception that these types of products require a lot of IT support, but this is designed to be as easy to use as WebEx. Ross Daniels shared with me that Rowan says a solution requiring a laminated instruction card for users is an automatic failure.

At upwards of $300k, of course this will have a limited market. But they still sell private jets after all these years and that is a pretty limited market as well. Again, in addition to actual sales, this is a showpiece. Even if you never plan on purchasing an IX5000, the fact that Cisco is emphasizing green, agile, efficient design, lets you know where their heads are at. The fact that the IX5000, in all its glory, had secondary billing as the lead-in for Project Squared, makes me think that Cisco is taking software seriously and their heads are figuratively in the cloud.