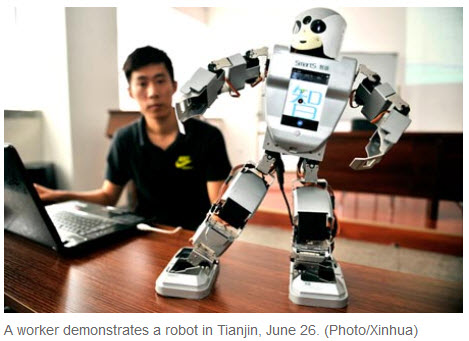 To solve the problem of chronic labor shortages and soaring labor costs, manufacturers in the Pearl River Delta in southern China are lining their production belts with robots and lining the pockets of the robotics industry with explosive growth, reports the Chinese-language Economic Daily.

As a result, Dongguan, in Guangdong province, is fast developing into a major robot production base. The robotics base in the city has leapt out of the gates as a number of manufacturers, along with the preparation office at the Songshanhu International Robotic Research Institute, have launched operations there. “The base will focus on robots for use by 3C firms in Dongguan and the Pearl River Delta,” noted Li Zexiang, professor at Hong Kong University of Science and Technology, who heads the base.

Outside of Dongguan, various robotics bases are sprouting in other places in the delta. The Guangdong provincial government has already listed industrial robots and other smart equipment as priority items for development, according to the guidelines for the information-oriented development in the province, publicized last year.