What Makes Us Happy

We used to be happy when the video didn’t tear and the audio didn’t echo.

We breathed a sigh of relief when a video class or a meeting started ON TIME without tech problems.

We used to be satisfied with the novelty and eye-contact that “moving pictures” brought to meetings.

Now, we have to be sure that the CEO looks good on video. Now, the agenda for a meeting is equal parts agenda and “stage management.” Now, a video call is as much a performance as it is a means of communication.

To put it another way, video communication in business looks so much like television that our brains, at some level, think they’re the same thing. When our eyes see an image on a video monitor, we instantly expect a “broadcast quality” experience. In the name of technological progress, business communications has entered a realm that our personal and entertainment worlds have lived in for years – small and large screen performance.

It’s really not fair. Honestly, it’s not. Through technology progress, we thought that we were merely improving on the telephone call, increasing productivity, and all that. But what we’ve really done is to bring collaboration so close to TV and movies that our brains have difficulty separating them. The consequence is that when we see the CIO, CFO, CEO, CblahblahOh on a video call we are silently (or not so silently) judging them alongside the performances of James Taylor, President Obama, the Mad Men and Lady Gaga. And how do they compare? Not to be obnoxiously rude, but the “talking head” of a Fortune 100 corporation rarely holds the attention and imagination like <insert name of your favorite performer>.

Am I setting an outrageously high bar for folks who aren’t even “performers?” That’s not the way to think about this. If they’re a good C<anything> then they are intrinsically performers. Any time they’re leading their team, any time they’re in front of an audience of any size, there’s not much difference between them and Green Day, and they know it. Good leaders with any title are the same way.

In legal circles, it’s no different. When in court, attorneys work with their Trial Presentation Specialist – one who brings audiovisual expertise into the court room – to prepare documents, PowerPoint presentations and videos that appear on the jury’s big projection screen. Attorneys are story-tellers and know that this is a performance. Even if the courtroom drama isn’t as intense as when Mr. Smith Goes to Washington, when there’s AV involved, the split-second timing of the attorney’s narrative and the appearance of images on the screen – when done right – elicits a strong emotional response from the jury (“Ladies and gentlemen of the jury, when the accused left the grisly scene of the crime, this is what he left behind” – FLASH to a picture of a grisly crime scene). If the timing is off, the performance “dies” and the impact is lost (“Ladies and gentlemen, if the AV technology were working properly, you’d see an image of a grisly crime scene just now!” – the spoken version loses something without the pictures).

I’ve been captivated by some great presentations and I’ve sat through some real snorers. The funny thing is that it wasn’t the subject matter that was compelling or boring, it was the presentation. It was the performance. Great sales numbers can be shown on a spreadsheet that would put “Too Much Coffee Man” to sleep OR they can be presented in a way that tells everyone where their holiday bonus is coming from. 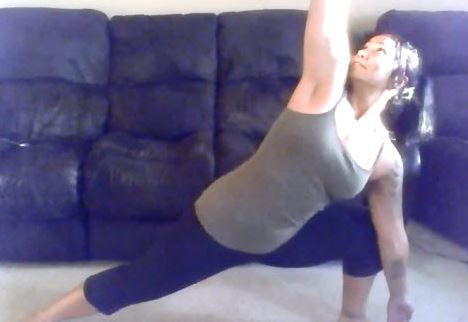 So, let’s cut to the chase here. Not too long ago, LDV Founder David Maldow and LDV CTO Ana Perez reviewed the telyHD Pro, in part, by using it for yoga practice. Without a doubt this goes beyond what most folks in the business community would do when evaluating such a product. The point is that they had some fun with it; they “kicked the tires” in a way that it might not have been designed for, and found a usefulness for it that wasn’t obvious. The ease-of-setup and ease-of-use freed their minds to be creative and have some fun.

That’s exactly where we are in the collaboration tools industry. Right now. Today.

This story repeats itself wherever technological innovation occurs. The first experience of the tech is that it’s expensive and tricky to work with. Over time it becomes easy enough for the non-technical, creative type to latch onto it and use it for her own purposes. Computer graphical design and visualization walked this path. Once relegated to university campuses or Industrial Light & Magic who could afford to buy high-end Silicon Graphics workstations, now off-the-shelf computer, purchased by an artist, becomes a tool for creative pursuits.

There are real, practical, business actions to consider here.

I’ll say right now that I’m no expert in business but I’ve learned a lot about it. “Innovation” and “wow” are no guarantee that a company is healthy or is a good place to work. But I’ve been around enough to spot trends: Great collaboration tools, a 24/7-connected generation, the retirement of “the Old Guard” and the moving in of “Gen Y.” All these things signal a sea change. I say that it is techno-creatives who lead the way. So keep your eyes open – we’re only at the start of this roller-coaster ride!

Theo Economides is a techno-creative, and he’s not above rhapsodizing on the subject. Why don’t you invite him over for cocktails and lively banter?

At his core, Theo Economides is an educator and performer. By schooling he is an electrical engineer, with more than 30 years in higher education, broadcast engineering and collaboration technology. But a lifetime as a musician and stage performer is the foundation of his perspective on meetings and collaboration. For Theo, these interactions - especially those involving video - are improvised performances, and those who recognize them as such end up being much more productive in them. His Chicago-based company, Greenline Emeritus, creates and curates online educational content and marketing videos. The opinions expressed in Theo’s commentary are his own, and are not representative of Let’s Do Video.