I love it when I come across something from outside the business video world that totally relates to a problem we have with video technology. In this case, I found a landscaping design principle which I believe is directly applicable to video tech design.

Recently, I participated in a videocast with other industry experts where, among other things, we discussed a fatal flaw of technology design. Specifically, we were concerned about vendors who fail to take user preferences into account. In terms of the business video industry, vendors often make products that are amazing in demos. They include all of their developers’ best and sexiest feature concepts and completely amaze us. But they fail in the market because they don’t really sync with the customers’ needs and workflows. This discussion had me thinking about how much better product development can be when actual customers and users have input, or are at least taken into account, during the design process.

At around the same time, I was surfing reddit and found something relevant. Reddit is a social/news website where users post their entries and the community votes on them. More popular entries move to the top of the list for a coveted spot on the “front page”. The site is divided into over 5,400 categories, or subreddits, covering just about every topic under the sun. While some subreddits, such as technology, science, food, movies, music, news, and sports, are expected and obvious, there are some really random and fascinating groups out there.

I discovered one such group celebrating a phenomena that I have long loved. The desire path. A desire path is created by people walking across a grassy area, creating over time a visible path on the ground which perfectly conforms to the needs of local foot traffic. 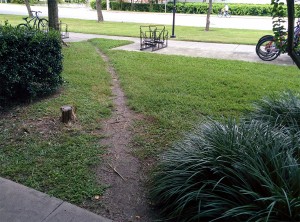 There is an old anecdote about a large university trying to design its central “quad” area, which was surrounded by various schools and administrative buildings. Their architect created formulas based upon expected foot traffic between various buildings, using data from course sign-ups and campus activities. He then used these estimates to determine where to put the cement paths, and how wide each path would need to be.

After this was all put in place, they had problems with students not using the cement paths, and creating unsightly dirt paths across the grass through normal foot traffic. 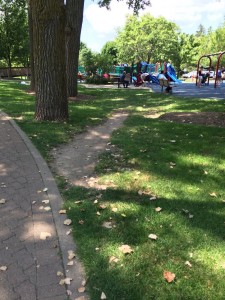 The university brought in a second architect who ripped out all of the cement paths and just laid down grass seed. After the grass grew, the students, without the guidance of any cement paths, just walked naturally from class to class across the grass field. After they had worn out the grass and created dirt paths from building to building, the engineer simply paved over these desire paths. The result was a perfect solution addressing everyone’s needs. The students were able to walk in literally the paths of their own design and choosing. The university no longer had unsightly dirt paths ruining the nice green quad as the students were now actually using the cement paths. Today, many universities follow this model, as a look through Google Earth can quickly verify.

The obvious moral of the story is to let the customer design your solution as much as possible. You can’t always anticipate their needs and workflows. No matter how smart your designers are, and regardless of how impressive and amazing their new features appear to be, you won’t succeed unless you take the users’ desires and workflows into account. 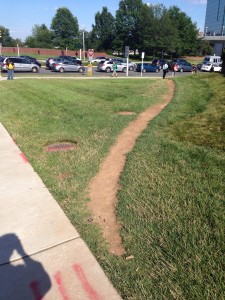 How often in business does one meeting room full of people need to talk to another one? It does happen, but its not the common workflow. Typically, a few remote members from the team who couldn’t be at the meeting in person, call in on the conference phone. Not from other meeting rooms, but from their home office or hotel. A nice upgrade for that experience would be a way for these workers to call in on video. That is what the industry really wanted and needed. The users created an audio desire path, working in groups with remote attendees. The industry could have paved over that path with the right video product, but instead they created this meeting room to meeting room dynamic which often failed to satisfy.

Over the years, video engineers came up with great advances that helped to drive the growth of video use. Higher resolution video, better connectivity, experience improvements, etc. All of these were appreciated and had a positive effect, but none of them have “flipped the switch” in the minds of users to make video the default communication tool over audio, which I firmly believe it should, and will, eventually be. The simple reason is that these advances didn’t mirror users’ existing workflows. They presented video as a tool to be used separate and apart from the rest of their normal daily communications.

Right now there is a new desire path developing across the field of business video. The persistent team messaging (PTM) dynamic has caught on with users and taken a life of its own. These tools are being spread by true grassroots user excitement. This isn’t about execs being impressed by demos and forcing it down on the working teams. The efficient, flexible, organized, and natural workflow of PTM is catching on and smart video vendors are looking for ways to ride this wave. In the last few months alone we have seen video providers integrating with existing platforms like Slack, and creating or buying PTM capabilities for their own. While it remains to be seen which implementation will ultimately be the right recipe for users, it is great to see the vendors recognizing user preferences and taking it into account when road-mapping their offerings.