Last week Zoom held their inaugural corporate event in the San Francisco bay area. The buzz among my fellow analysts and other attendees was that this was very different from the typical industry show and that it was an undeniable success on several fronts.

Hosting a massive first time event is bound to be a learning experience for any marketing team. While my expectations were high for the event overall, I was ready to excuse the inevitable logistic snafus. However, the entire day went off without a hitch. They even got a playlist of the keynotes and sessions up on YouTube for those who couldn’t make it.

Founder and CEO Eric Yuan set the tone early by greeting attendees in the parking lot with a backpack coffee rig. Zoom has had a great year and they are taking a day to let down their hair and have some fun.

Eric Yuan gave the opening keynote. It’s funny to hear Zoom’s story from his perspective, because we are all part of it in a way. He gave us WebEx in 1997 and was responsible for it through 2011. We all used it, it was the default option, but we all complained about it. I never thought about it at the time, but he must have been reading that stuff and it couldn’t have been a great feeling. His dream for Zoom was/is to have a product that his users actually like.

Zoom President, Dave Berman, then presented on workplace trends. At the end he shared some impressive usage and adoption stats from some of their bigger name enterprise customers. This was followed by a fireside chat with Eric Yuan and Sir Michael Moritz. Unfortunately, most of us will never find ourselves in a situation where we are negotiating for investments from Sequoia. However, it was fascinating to learn what Moritz looks for in companies to invest in.

It is also worth watching Head of Marketing, Janine Pelosi’s session which went pretty deep with three Zoom customers using the platform in particularly interesting and compelling applications.

The rest of the keynotes can be found on their YouTube Playlist.

I’ve had the pleasure of having both Oded Gal (Head of Product Management) and Nitasha Walia (Sr. Product Manager) as guests on the LDV Podcast (Please see Episode 25 and Episode 35). They did a great job introducing new Zoom features and capabilities.

There were several announcements but I think people were most excited about the recording transcription. The killer feature is the ability to click on the text and have the video start playing from that moment of the meeting. I often record meetings because I don’t want to take notes, but then I don’t feel like watching the entire recording. The ability to skim a transcript, and jump to the video for full context, is going to have a lot of applications. One announcement that I think got a bit buried is Zoom’s pending support for digital signage. I’m calling it now, that one is going to be a topic for further discussion.

I attended two sessions. You can see the videos here for both Logitech and AVer. The Logitech session was interesting as they were not speaking as video vendors and Zoom partners, but as video users and Zoom customers. They literally explained how they use video within their own organization. Nice to know they drink their own champagne. The AVer session was cool because they also focused on use and users, with live guests calling in from classrooms and zoos. Other sessions are also available on the YouTube Playlist.

As expected, video camera vendors (Logitech, AVer, PanaCast, Yamaha), were showing off their latest wares. I talk to these companies regularly and I can tell you that the harder they partner with cloud video companies like Zoom, the more cameras they sell. Spirits are usually good at these events, but Zoom’s partners seemed particularly happy to be there. I noticed a common dynamic at all of the vendor booths that I thought was somewhat unique to this event. Usually you see product demos at the booths, whereas here I saw more discussions about use cases. People seemed to get through the camera differentiators quickly and were more excited to talk about what can be done with the combination of today’s affordable/flexible peripherals and cloud services.

In the center of the entire space was a glass walled Zoom Room.

In the very center of the event is a Zoom Room. Just as it is central to their enterprise strategy. #Zoomtopia @zoom_us pic.twitter.com/CadyJn5YZo

Zoom is extremely committed to Zoom Rooms. As I’ve recently written, the offering is at the heart of “a larger, multilayered strategy, to further establish the Zoom brand as a fully enterprise ready video vendor.” There was constant traffic at the Zoom Room as attendees saw demos of features including the new scheduling display and Zoom Rooms for Touch.

This is a celebration and it should be fun. Also, it is a real working day for everyone there so it’s nice to break things up between the working sessions. The Zoom team had plenty of things to keep everyone happy. Giant chess, checkers, and jenga games were set up along with bean bag tosses and other games. The millennials (and they were everywhere) seemed to really dig it. They also had a bunch of fun areas set up including a “swag shop” with free stuff and a picture station to tweet out pics. I usually hate pics of myself, but this came out pretty good!

Look who stopped by #Zoomtopia17… it's none other than David Maldow of @LetsDoVideo 😀 Very nice chatting w/ you David!! pic.twitter.com/1ullbEu32M

Then, of course, there was Weezer. That’s the back of my head in the lower left corner.

A perfect way to close-out #Zoomtopia17, with @Weezer! Big thanks to all of our customers and partners who joined us!! 🙂 pic.twitter.com/Ycs4vJYTkX

Getting me backstage access to hang out with my rock idols doesn’t guarantee positive coverage of your company and its offerings. But it’s definitely a great way to get my attention! Brian Bell hung back and chatted with a few of us for a while after the picture session. Nicest guy ever. 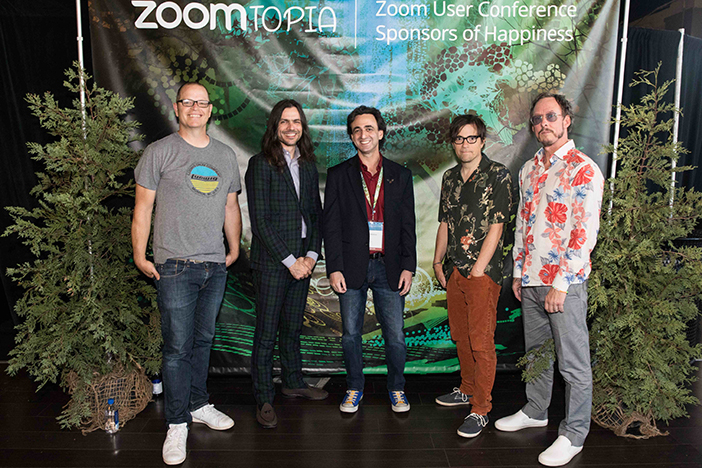 At the end of the day we were left with the impression that despite the incredible success of Zoom thus far, they are just getting started. The industry as a whole is growing massively as the democratization of video from the boardroom, to every room, continues. Zoom could afford to rest on their laurels, but the new announcements at this event make it clear they have a pretty big forward vision. I’m already looking forward to Zoomtopia 2018.